After tasting the exquisite patatas bravas in northern Spain, we searched high and low in Granada for the equivalent. After getting excited upon seeing it on a tapas menu, and subsequently disappointed, we decided to take matters into our own hands, keeping all the best components but make the potatoes crispier, the sauce more substantial and add back in the allioli sauce that the dishes here were missing. And voilá! This is the only patatas bravas recipe you'll ever need!

​What we're aiming for:
A large platter of patatas bravas to be shared as part of a meal for up to 4 persons:

We like to serve this dish to friends with our other favourite Spanish tapas recipe: Albóndigas (meatballs) in a tomato sauce

​The Components: The potatoes

​The Algorithm: The potatoes
​(55 minutes)

- Preheat the oven to 200°C (about 400°F)
- Put a roasting tray with 2 tablespoons of olive oil into the oven and let it heat up nicely
​- Meanwhile, cut the potatoes into roughly 2cm chunks (only peel if you want to - we don't bother)
- Toss the potatoes cubes in a splash of olive oil, with a sprinkling of your favourite spices
- Take the tray out of the oven, carefully toss the potatoes in the hot oil, and pop back in the oven to bake for about 45 minutes until crisp and golden.

​The Components:  The bravas sauce

​The Algorithm: The bravas sauce
(30 minutes)

- Put 2 tablespoons of oil into a heavy-bottomed pan on a medium heat, and cook the onion for about 7 minutes until golden and soft
- Put in the chilli, and cook for another couple of minutes
- Then add the tomatoes, sugar, salt and smoked paprika and stir well
- Bring to the boil, and then turn down the heat and simmer for about 20 minutes until thick and dark
If you like a smooth bravas sauce, at this point you could mash with a potato masher right there in the pan, or alternatively, pop the whole mixture carefully into the food processor to get rid of any chunks of tomatoes and onion
​- Take off the heat, add 1 tablespoon red wine vinegar, and adjust the seasoning if necessary.

​The Components:  The allioli sauce

​The Algorithm: The allioli sauce
(5 minutes)

- Put the egg in the small bowl of a food processor along with the garlic and red wine vinegar.
​- Add 1 tablespoon olive oil and whizz until incorporated, then drizzle in the rest of the olive oil with the motor running, until you have creamy mayonnaise-style sauce
- Season with salt to taste.

If you have some greens like asparagus, right before the potatoes are finished in the over, pop a few lightly oiled asparagus stalks on a screaming-hot griddle, letting them char nicely. After a few minutes, take them off, sprinkle with a bit of sea salt and serve along with the potatoes.

To serve the patatas bravas, place the nicely crispy potatoes on a platter (you might have to scrape up from the bottom of the pan but these are the best bits), pour a generous helping of the red sauce over and then a dollop of the allioli on top of that. With a sprig of parsley, your dish is now ready to serve! Bring a separate bowl of the rest of each of the sauces for more servings of everything.

And for a varied table of dishes and bringing all the Spanish tapas together, we suggest serving this dish to friends with our other favourite recipe: Albóndigas (meatballs) in a tomato sauce. 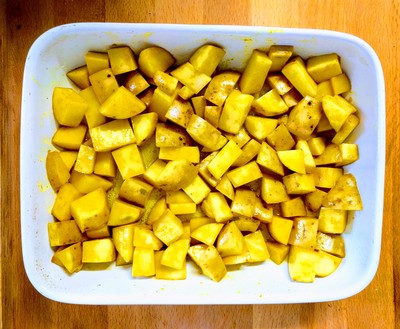 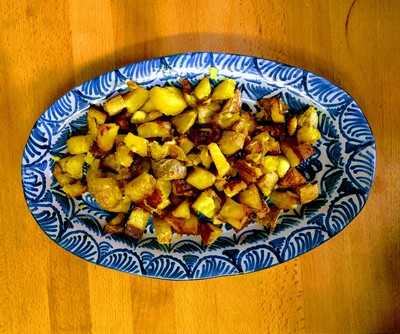 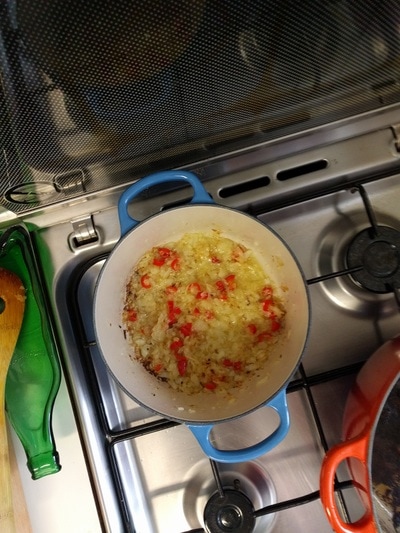 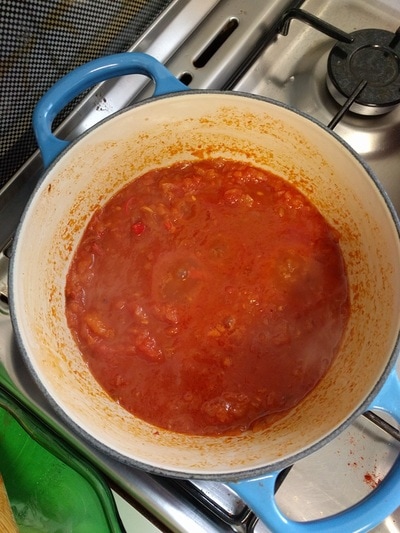 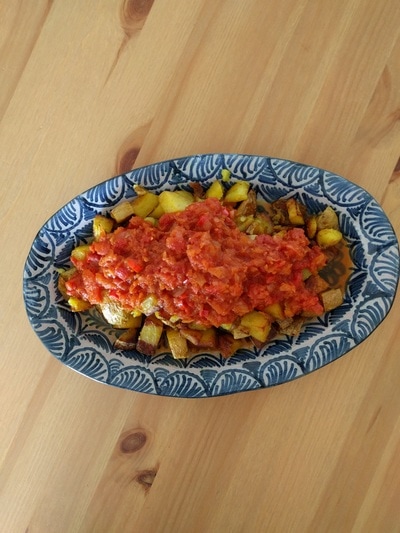 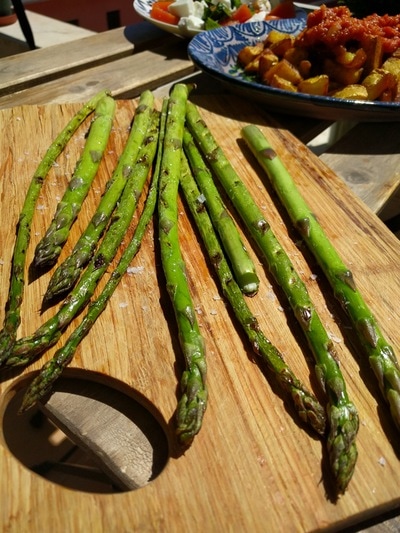